With the increasing amount of Acro-related skills and tricks packed into mainstream competitive dance shows and competitions, it can be confusing for people to understand what differentiates an Acro dance routine from a dance routine of another genre that has Acro moves in it.

Acro Dance is different than jazz, lyrical, contemporary and other styles of dance in that it’s predominantly composed of Acrobatic elements such as strength, flexibility, balance, contortion, tumbling, limbering, and sometimes partnering and lifts. The goal of an Acro dance routine would be to showcase these elements, braiding them with dance technique to add dynamics and fluidity.

Perhaps what contributes to this lack of clarity are major network shows such as World of Dance, So You Think You Can Dance, and others like it, which are often packed full of Acro tricks and stunts, with dancers going all in to win. The resulting effect trickles down, and before you know it, dancers everywhere are pushing their limits, upping the ante, and eventually, we see our locals studios and competition routines chock-full of as many (and often more) tricks than are allowed.

This further muddies the waters of defining dance genre categories at competition and makes it harder to separate Acro dance routines from routines that have a lot of Acro. This can be especially confusing for people who are new to competition, and for new dance parents.

What is Acro Dance?

When it comes to dancing competitions, Acro has turned things upside down (unintentional pun) and has become hugely popular. It’s everywhere and in everything. Chances are you’ll see more aerials than full rèlevés on any given day at competition.

Acro Dance combines dance techniques with acrobatic elements, fusing them together choreographically so they are artistically intertwined and smoothly executed. Acro Dance is generally considered to have three main elements: strength, balance, and flexibility. Other elements that are often seen in Acro Dance include some or all of the following: contortion, limbering, partnering and/or group work, lifts, tumbling, and some form of classical dance technique.

In the competition world, how is Acro dance different than jazz, lyrical or contemporary?

Jazz dance and Lyrical dance are entirely different genres of dance, and though they may have Acro tricks and moves inserted into the choreography, they are distinct, codified styles which have their own vocabulary of movement and specific requirements in the competitive world.

If you removed the Acro tricks from a Jazz or Lyrical dance, you would (should) still have a great Jazz routine or Lyrical routine.

Since some people view contemporary as being open to interpretation and not confined to one style, some competitions (like KAR) allow unlimited Acro tricks in contemporary dance routines (much to the chagrin of many).

However, what’s important to remember is that Acro dance is its own thing, and the goal of an Acro dance is to showcase Acro elements and skills.

How is Acro-Dance defined at dance competitions?

The prevalence of Acro tricks at competitions can be a problem, especially when you trend towards having less Acro in an Acro dance category and more Acro in non-Acro dance categories, the distinction between these styles becomes increasingly ambiguous.

This can be problematic when it comes to category placement and adjudications. Most competitions state in their rules that an Acro routine should be 50% Acro and 50% dance. Not all dance competitions have the same specifications though.

Rules about what constitutes an Acro dance vary from competition to competition. Showstoppers dance competition stands out from the rest in a good way for its rules and regulations regarding an Acro dance routine: “A routine using controlled acrobatic moves such as walkovers, limbers, handstands, chest rolls, etc. may contain gymnastic passes. The majority of an acrobatic routine must be acrobatic moves, otherwise, the routine will be scored lower by the judges.

What the competition rules say!

Acrobatic Dance may contain flexibility moves or contortionist moves, however, it must contain dance moves, steps, and choreography”(Showstoppers). I applaud Showstoppers for this description and these requirements for Acro dance, as I feel it supports the need for staying true to Acrobatics in an Acro dance.

However, the overwhelming majority of dance competitions are unfortunately less specific. Often, their description/requirements for Acro dance are something like: “Acro – A routine containing acrobatic movement/gymnastics; routine must contain 50% dance choreography” (Groove).

Then there’s KAR Dance Competition: “ACRO/GYMNASTICS – Performance must use a combination of dance technique and acro/gymnastic movements, such as walkovers, aerials, handsprings, etc. Any number of acro/gymnastic tricks are permissible”(KAR).

A Teacher’s View on Best Practices When Choreographing For Acro-Dance Sections.

Personally, when I choreograph an Acro dance, whether it’s a solo or a group, I set out to make the routine almost entirely composed of Acro skills as I feel that it stays true to the genre of Acro dance, and it’s much more interesting to watch. It is what makes Acro stand out, and what keeps it unique.

Students travel by walking on their hands, cartwheeling, walking in a bridge, doing walkovers or limbers, etc.

Depending on what the music calls for, I do include classical technique throughout the routine for connective steps in whichever style fits with the music and/or storyline, but for the most part, I try to keep my Acro routines at around 85-90% Acro-based. Don’t think that’s possible? Watch Cirque du Soleil.

Choreographing competition routines in this way has never negatively impacted the score for my routines, if anything the feedback and scores reflected overwhelmingly positive opinions from judges and audiences.

If it’s an Acro dance in an Acro dance category, you’re never going to hear a judge on the critiques say, “There is just way too much Acro in this dance,” just as they wouldn’t say there’s too much Jazz in a Jazz dance.

How Acro Tricks should be used in other categories

Each year teachers and choreographers seem to insert more Acro tricks into routines in the jazz, lyrical, or contemporary categories. So, what are the rules regarding Acro tricks for non-Acro dance categories? Let’s take a look at an example.

This description is relatively consistent across the board for most other competitions, but there are some variations (i.e. not every competition considers forward, backward and shoulder rolls an acro move). Not to mention, many studios are not above bending the rules here and there and packing as many tricks as possible into their routine.

Also, not every competition deducts points from their score if they go over the trick limit in a routine, they instead charge a fee if they feel that the dance needs to be changed to a different category like Open or Acro.

Also, it’s possible judges might not realize a routine had one too many tricks as they have a lot to focus on at once, like giving clear and constructive critiques, suggestions, and corrections for the recorded adjudications they’re giving.

When it Comes to Acro Tricks in Non-Acro Dance Categories, How Much is Too Much?

I think there definitely comes a point when the number of Acro tricks can be problematic in a non-Acro dance routine.

Before putting an Acro move or trick into a routine that is in a different category, I think the important question to ask is what is the goal of the dance? If the trick that you’re inserting into the dance doesn’t flow with the movement, theme, or storyline of the song it almost comes across as tacky.

Not only that but there are times when it could be dangerous. In a Tap routine, your goal is to showcase your tap-dancing abilities, not your Acro skills. Doing an aerial in tap shoes is extremely unsafe, and it’s not worth the risk. A tap routine should focus on showcasing the dancer’s tap technique, rhythm, syncopation, musicality, etc.

In a Jazz routine, the goal should be to showcase your jazz technique, style, leaps, turns, etc. It shouldn’t look like a series of tricks strung together by some transitional jazz-like moves.

If you’re doing a Lyrical dance routine, your goals should probably be to tell the story of the song, to use your movement to express the emotion behind the lyrics. Inserting too many tricks in a lyrical dance may be more distracting than anything, and might not fit with the intent of the song.

That’s not to say that we should frown upon putting Acro tricks into dances of other categories, but I think that it’s important to stay true to the genre of dance that you are choreographing, performing, teaching, etc. If it makes sense to put those moves in the dance, (i.e. it fits the storyline, character, theme, song, goal), and it follows the flow of the movement (i.e. can seamlessly dance your way in and out of the trick without it being distracting), then I say go for it.

Just remember that each category of dance has its own unique artistry and depth, and it would be a shame to sacrifice that for the sake of showing you can do an aerial, back handspring, and a chest stand. I think it’s important to help dancers understand this, too.

Naturally, they are going to want to put as many cool things into their routine as possible, because they want to emulate those wowing routines they see on TV, social media, etc. It’s great for them to want to have goals of achieving lots of dynamic moves and tricks, as long as it doesn’t compromise their safety, and as long as they aren’t valuing the tricks above things like technique, performance quality, musicality, etc.

I think it’s up to us the teachers and parents to help guide our dancers to understanding that it’s not what you do, it’s how you do it!

Check Out our Google Web Story

If you would like to read more about competitions or acro dance why not try some of the following articles! 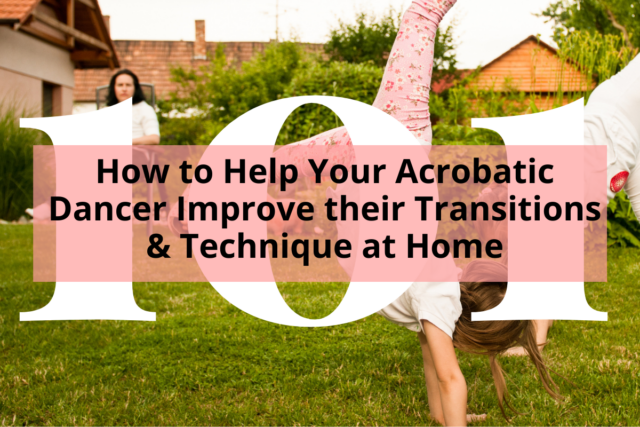 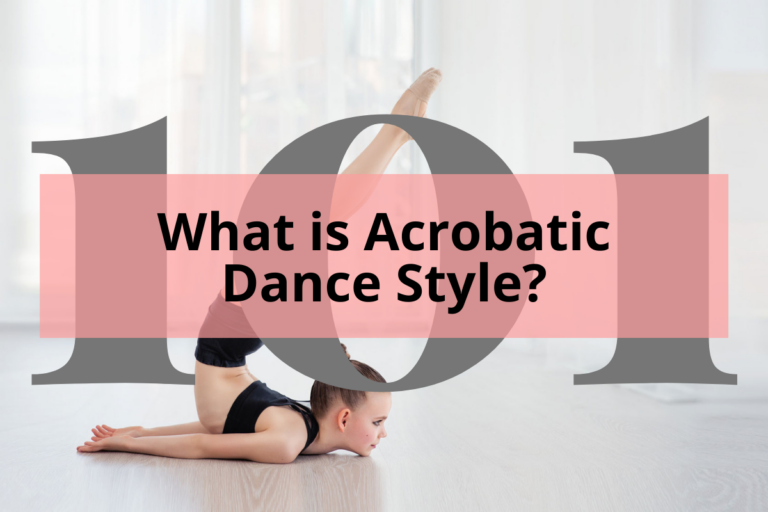 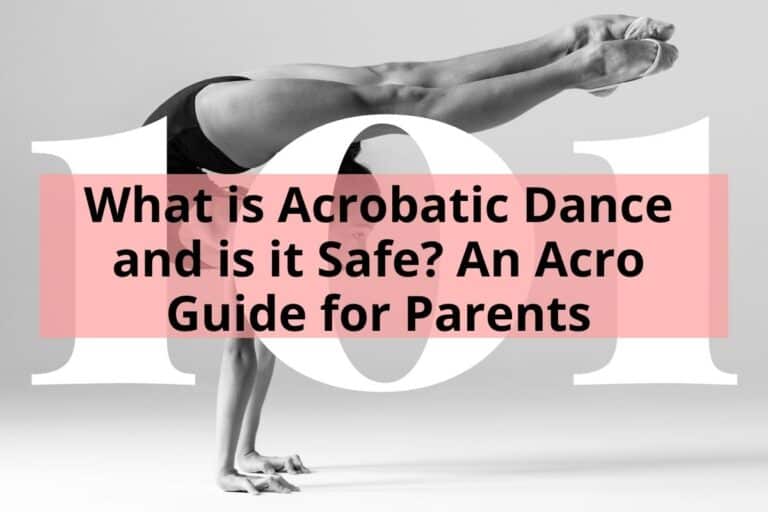