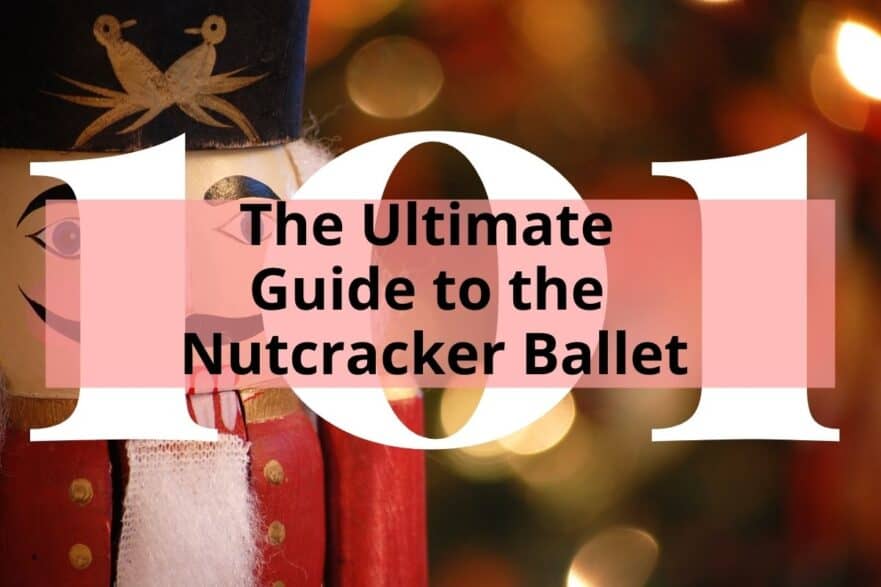 The Nutcracker is a ballet that has become a holiday tradition, with a variety of stage productions and screen adaptations. This is your map of the plot, characters, music, costumes, and history of The Nutcracker. The ballet itself is delightful on its own, but I’ve done some dramaturgy (or “dancerturgy,”) for you so you can more fully enjoy your Nutcracker experience.

The Nutcracker is the story of a young girl named Clara (or sometimes Marie) who receives a nutcracker toy at Christmas, the toy gets broken and transforms into a prince who takes Clara on a journey through a magical land of snow and sweets. In the Ballet community, it is not Christmastime without The Nutcracker.

I still remember the first live performance of The Nutcracker that I ever saw. I was in elementary school and The Irene Fokine School of Ballet put on a production at a local high school theater. It featured students of the ballet school as well as guest artists from New York City. I had a CD of the music at home and after the performance subjected my family to playing it pretty much nonstop.

The Story of the Nutcracker Ballet

Like many fairy tales, there are many different versions of The Nutcracker, with each choreographer and creative team putting their own stamp on the details of the story. Most productions use The Tale of the Nutcracker, an adaptation by Alexandre Dumas of E.T.A Hoffman’s The Nutcracker and the Mouseking. I offer you a brief summary of the details that are mostly consistent from one production to another.

What happens in the nutcracker? – A short summary

At a family Christmas Eve party, a young girl, Clara (or in some versions, Marie or Mary), receives a Nutcracker Soldier doll as a Christmas gift from her Uncle, Godfather Drosselmeyer. Clara’s brother Fritz fights with her over the doll, leading it to get broken. Drosselmeyer uses his magic to repair it, leaving it in the living room as Clara heads off to bed. She later returns to check on her doll and a battle ensues between the Nutcracker doll that has come to life and some mice. Clara helps the Nutcracker to victory by throwing her ballet slipper at the king of the mice. The Nutcracker turns into a prince and he and Clara travel through the land of snow to the Land of the Sweets, where they are entertained by the Sugar Plum Fairy and dancers from all around the world. Some versions end with Clara back home in her bed, indicating to the audience that most of what transpired actually was in Clara’s dreams.

Clara or Marie? Why does the main character in the Nutcracker have two names?

In the original E.T.A. Hoffman story, the main character of The Nutcracker is Marie. When Alexandre Dumas adapted the story in 1844, he changed the protagonist’s name to Klara, which when translated to English, became Clara. Both versions of the story are used as source material for different versions of the ballet and so both names are commonly used, somewhat interchangeably.

When did the story of the Nutcracker become a ballet?

New York City Ballet performs George Balanchine’s version of The Nutcracker, which is arguably the most famous, with the Christmas Tree magically rising high out of the stage. Though the first Full-length Nutcracker in the US was choreographed by William Christensen at San Francisco Ballet, Balanchine (the founder of NYCB) is often credited with making the ballet a holiday mainstay. He had performed in the ballet in Russia as a child and continued using children in his production, which many say is part of why the ballet became a Christmastime tradition. Pacific Northwest Ballet also currently performs the Balanchine choreography and offers a wonderful history of Balanchine’s Nutcracker, which premiered at the New York City Ballet in 1954.

What is the best version of the Nutcracker Ballet?

The best version of The Nutcracker is the one you get to see or dance in. I believe everyone should see George Balanchine’s version at least once, as it is the quintessential production. Check out THIS ARTICLE HERE for more about different productions.

Adaptations of the Nutcracker Ballet for video and television

Having been adapted by everyone from the Carebears in 1988 (I definitely watched this version on VHS) to Barbie in 2001, The Nutcracker is a part of the cultural zeitgeist beyond the world of Ballet. Before the 2018 Disney Film The Nutcracker and the Four Realms, which starred American Ballet Theater star Misty Copeland, one of the most famous film adaptations of the Ballet was the 1993 version (which you can watch on Amazon), starring Macaulay Caulkin and the New York City Ballet.

Symbolism in The Nutcracker

As versions of The Nutcracker vary, so do interpretations of meaning. Some interpret the ballet as Clara’s coming of age, her growth into an understanding of romantic love. The original Hoffman story featured a girl named Marie who felt constricted by the strictness of her family, experiencing refuge in her imagination. This article from NPR explores that interpretation in light of German language and the history of Hoffman himself.

In a completely different approach, in this article from Dance Magazine, Donald Byrd suggests looking at the ballet as a geopolitical metaphor. He offers a reading of the ballet that supposes the mice as a foreign invader that meets its demise at the hands of Clara and the Nutcracker, calling the second act a “vision of European supremacy.”

Costumes in The Nutcracker

In most productions of The Nutcracker, Clara begins in a party dress like the other children and when she comes to check on the broken nutcracker, she is wearing a nightgown. That image is probably made most famous by Gelsey Kirkland, who played the role of Clara in Baryshnikov’s production for ABT in 1977.

The Mouse King in Balanchine’s version is another famous costume in The Nutcracker, it involves seven heads! Perhaps the most famous costume in The Nutcracker is that of Mother Ginger in Act 2. She has a giant skirt that conceals small children who come out from underneath it, the polichinelles. New York City Ballet’s version is “85 pounds and nine feet wide, the costume requires handling by three people once it is lowered by pulley over the dancer’s head.”According to New York City Ballet, there are 150 costumes on stage in a single performance of George Balanchine’s The Nutcracker®, with only a few small accessories still used from the original production in 1954.

The Nutcracker also features classical ballet tutus. The Sugarplum Fairy, Snow Queen and Dewdrop Fairy all wear “platter” tutus, which are short and extend directly from the hips. The Snowflakes and Flowers wear “romantic” tutus, which extend down the legs towards the shins. The costumes for the divertissements in Act II vary from production to production.

The Music of The Nutcracker

With an iconic score by Pyotr Ilyich Tchaikovsky, The Nutcracker Ballet has become synonymous with Christmas. The Opening March, Waltz of the Flowers, Dance of the Sugarplum Fairy, and Russian Trepak are some of the most recognizable melodies of classical music. The full score is available to listen to here, along with Tchaikovsky’s Swan Lake. If you prefer to use Spotify, you can find the full-length music of the ballet here.

Pyotr Ilyich Tchaikovsky, the composer of Swan Lake and The Sleeping Beauty was the composer of The Nutcracker. Apparently, a piece of music that Tchaikovsky had composed for The Sleeping Beauty that had been deleted from that ballet was brought into The Nutcracker when Balanchine needed extra music at the beginning of Act II. Different recordings organize the music differently, but the main pieces are listed below:

The Significance of The Nutcracker

For ballet dancers, The Nutcracker is often their first experience in a full-length ballet, is a rite of passage, and feels like a magical experience. Many start as a page or an angel as a young dancer, and work their way up to more featured roles as time goes on. I personally grew up in a ballet/tap/jazz studio environment and never actually performed in a production of the Nutcracker, so to talk about what it’s like, I called my friends.

Caitlin Grater, a Pittsburgh-based Massage Therapist, and Wellness coach, and mom of two boys said, “I lived for Nutcracker, and after almost 300 performances of it over 10 years I have lots of memories! I grew up doing Balanchine’s choreography and the opportunity to play Mary (as she was named in our version) was probably the most magical thing. The antics of being a polichinelle under Mother Ginger’s skirt, the backstage silliness, and being on such a huge stage in a fancy historical theater, The Benedum Center, added so much to the fun and magic of it all.”

Frances Lai Baca, a Dance Professor working in Berkeley, California, grew up dancing in the Berkeley Ballet Nutcracker, starting as a pre-ballet student as an angel, and performing nearly every other role in the production over her thirteen years as a student there. While she said her favorite role to look back on was the Snow Queen, she really learned the lesson of committing to her role, no matter what, from her six years of playing a mouse. For Baca, The Nutcracker was a family affair that shaped the entire family’s holiday time. She and her sister both performed, dad worked backstage and mom made and sold concessions. “For it to be Christmas, The Nutcracker must be involved. If I can’t see it live, I have to watch it on screen at least once,” she shared.

Long-Island, NY-based ballet teacher Heather Garbrandt grew up dancing a variety of Nutcracker roles as a student at the New Jersey Ballet. She also performed in professional productions with the Staten Island Ballet and Ballet for Young Audiences. Like Baca, she is a fan of the snow scene: “Snow scene wins every time. The music and the magic of the snow falling are the absolute best! I never got to dance Snow Queen but I would have loved to,” she said.

The Nutcracker in the 21st Century

As the world continues to evolve, it is important to consider how people are represented on stage: who is present, how they are represented, and who is missing. The divertissements in Act II of The Nutcracker are well-known pieces of music: Chinese Tea, Arabian Coffee, Spanish Chocolate, Russian Trepak, Dance of the Reed Flutes (sometimes also referred to as Marzipan), and the Waltz of the Flowers. The Chinese Variation in many productions of The Nutcracker is a caricature and has included yellowface. In 2017, New York City Ballet made the choice to modify the original Balanchine choreography to remove stereotyped movements. Dance Magazine featured an article by Phil Chan and Georgina Pazgoguin, dancers who have created an organization dedicated to making portrayals of Asians in dance more culturally sensitive and accurate. You can read it here.

If what you’ve read here has piqued your interest and you would like to learn more, check out Jennifer Fisher’s Nutcracker Nation, a book that explores in more detail how The Nutcracker as we know it has come to be. 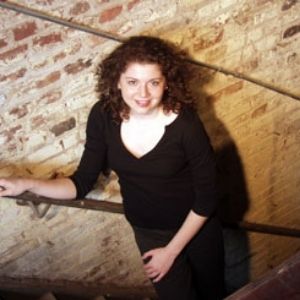